Sunday 24th February was the day of the inaugural race of the road season and Lostock 6 was the chosen first event.  Conditions were extremely kind to us - this time last year the beast from the east was putting pay to lots of running plans however, today we were basking in 46 degrees in Bolton.

We had a fantastic turnout of 15 males and 12 females.  A very big welcome to our new members Martin, Andy, Stacey, Karen and Andrea - it was lovely to have you join us and hope that you enjoyed it. A huge welcome back to those who have renewed your membership (or are about to) too. 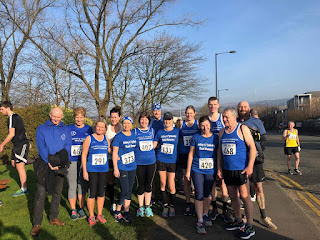 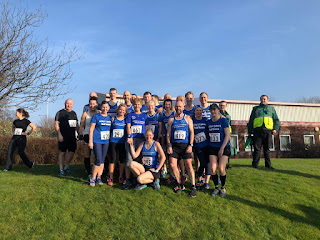 It really isn’t all about who is the fastest, we are a mix of runners at different points in our journey. Some using the races as a training run and others working towards their current goals. That said, I must mention those who took our podium finishes today.  For the males:

Special mentions to Mike and Amanda who incorporated the race into their 23 mile marathon training run and to Phil who got a big PB.  Three of our lovely girls, Catherine, Joanne and Joan, also did really well after doing a 21 mile run on Friday.

Those of us who went back to Barnstormers had a catch-up after the race and were treated to some delicious cakes made by Joan (or make that three in Bacon Mon’s case).  I’ve heard that this baking might just be a regular feature in the road events this year.

We are in the process of updating the spreadsheet but in the meantime I can clarify that there are 8 set fixtures in the calendar, parkrun is back (yay) and your fastest parkrun time will count from any parkrun event.  You will get one bonus point for a marathon (1 maximum).  You will need to do 6 events to qualify.  Please get the fixtures in your diary, if you haven’t done so already.  Next up is Gin Pit Half on the 24th March.  This is a cheap, local half covering a scenic route, for those who haven’t done it yet.

The members were welcomed to the meeting.

There were apologies from committee members, Mark Riches, Michelle Fairclough and Tim Campbell.

Road Section
Chris Bennett explained he was stepping down as Captain and Joan and Nicola would jointly be taking on the role for 2019. The Central Lancs Grand Prix is going through changes. To freshen up the competition 5 races will be from CLGP members and 5 new ones. This hasn’t gone down well with all clubs, although A&T can understand why this needs to be done. This year the Gin Pit 5 will be a CLGP race but it will mean it won’t be in 2020.

Cross Country Section
Michelle sent in an email which Matt read:-
Sorry I can’t be there tonight, flu has knocked me for six this week, I’m not sharing it!
I’d like to say thank you to every member that has supported me as Captain this year, I have been totally overwhelmed with the numbers at this seasons races.  40 A&T runners in total have raced up to now.  We still have one more race left if any other members would like a try before season ends - it’s a Mid Lancs race so there is no cost to our runners.
Looking back to last year’s league we barely scraped together a ladies or men’s team at most fixtures and this season we’ve had the men’s team in the top 3 and we’ve even had enough ladies to make 2 teams in the results!  I’d never have believed it so thank you and be proud.
I’ve been to every Red Rose meeting on Wednesday evenings and have built friendships with other team managers which I have enjoyed.  There are few areas I can improve, being faster with the results spreadsheet being one (that’s my weak point).   Id also like to discuss another method of letting all members know about upcoming events as not everyone uses facebookor the website, suggestion of whatsapp groups or texts /emails maybe if possible.  Also if numbers increase -  a better system of collecting the entry fees would help.
I’d like to remain as Captain and on the committee if everyone agrees, I also understand if anyone else would like to takeover.

Fell Section.
Tim also sent an email:-
In 2018 we were again accepted in the Run the Moors grand prix and so the A&T championship races broadly followed the RTM champs, which meant a diverse set of races from short local races like Rivington Pike, to the more hardcore stuff in the Lakes such as Langdale Horseshoe, which was epic!
Average numbers at races were down from 2017 figures, but still healthy comparative to previous years and all open age prizes were given out. However no veterans reached the minimum number of races.
The 2019 season sees us competing once again in the Run the Moors champs and the list of races has been published on the website and on Facebook.

Triathlon Section
Matt said he planned to keep the scoring format the same for 2019.

Ultra Section
Dave explained the Ultra section was growing with more members having a go at distances beyond 26.2 miles. For this reason he had decided to alter the scoring for 2019, removing half marathons and only counting trail marathons and ultras. He is making some changes to the way points are calculated to make it fairer for all taking part.

Membership
Jon Hall confirms last year’s membership to be 91 and this issteady compared with previous years.

Treasurers Report.
Malcolm informs the members that the club’s incomings and expenditure for 2018 were very similar and the club’s financial position was also very similar to that at the end of 2017. The bank account is healthy for the size of the club. He expects things to be similar for 2019 so proposes to set subs for 2019 the same as in 2018:-
£35 for membership renewal
£40 for new members
£20 for second claim members
£25 for half year membership which starts from 1st August.
Members were reminded that membership needs to be renewed within 4 weeks of the AGM or they will be considered as a new member and the fee will be £40.

AOB
A&T Road Runners are planning to help out again this year at the Manchester Marathon and the Bolton Ironman. Helping out at these events generates good income for the club and helps keep member’s subs down. We ask for you to support and help if you can. Lynn is planning to organise both of these so please contact her if you wish to help.

The Gin Pit 5 is planned to be held on Sunday 13th October 2019.
The Presentation Night is provisionally booked for 30thNovember 2019, this is to be confirmed.
Posted by Gary Stevens at 20:47 No comments:

The role of Race Organiser is still vacant

The Gin Pit 5 race makes a significant contribution to Club funds, so if you would like to take on this important role, please speak to one of the Committee on Sunday or if you prefer email me on mark.riches@talk21.com

Posted by Gary Stevens at 10:52 No comments:

As we are on a new platform this year you will need to select your group name from the list shown on the page. Please ensure you select

PS I know it’s spelt incorrectly!
Posted by Gary Stevens at 14:19 No comments: