Hi all,
The website has been updated with the following information:
1. Latest XC standings and details for the next race
2. Fell fixtures for 2018 with a write-up on each race
3. A downloadable Race Calendar for your fridge showing all 2018 champs fixtures for XC, road, fell, ultra and tri


http://astleyrunners.co.uk/
Posted by Gary Stevens at 08:57 No comments:


Sometimes it feels like groundhog day when LSV crops up twice in a XC season. But this is A&T turf, so there's no reason for our flag not to be out there flying in the wintery winds. (Albeit a slightly crooked flag this week).

Saturday was race 9 of our club league and the forecast for the whole weekend was pretty grim but never fear - XC never gets cancelled. However, I do think we got lucky compared to the hardy halfers on Sunday!

The lads have always been really great turning up early doors to put the team tent up at all of the XC races so the ladies thought it only right that we took our turn.  We did alright for a first attempt and we scored a respectable 8/10 from Dave Sloan, we'll take that!

Many club members were competing in various half marathons on the Sunday so it was expected that numbers may be down for XC. Four ladies made the start line and after much deliberation by Jackie on should she, shouldnt she, the gun went off and 100 meters into the race made Jackie's mind up to keep fresh legs for her half on Sunday.

Suzanne, Louise and myself took on the 7k (how far?) 2 large lap course, fairly flat but deceptively heavy going, it was tugging at my spikes in places and I've not felt that all season.

Next up was the mens team - Dave, Tim, Gareth and Chris B. Again, Tim was racing on Sunday so it killed him to 'take it easy' and trot round the 5.9 mile course.

Dave and Gaz were very consistent, looking strong. Dave banking more miles ready for his epic run on Friday.  Gaz was thinking he should have gone for longer spikes!  Sadly Chris Bennett picked up an injury so was forced to stop. Hope you are on the mend soon Chris.

Dave followed by Tim (who just had to pick off a few competitors with a sprint finish) then Gaz all finished stong. Well done.

A huge shout out to our supporters turning up in the cold to cheer us all on, I spotted Scholesy, Mark, Rachel and Kay. It gives us a welcome boost out on the course so thank you.

The next local race is SEL Chorley Astley Park this time next month (17/2). It's a great course, a good mix of grass, gravel paths, tree roots and a few 'little' muddy hills to get your teeth into, I'm sure most of you have ran/raced the perimeter of the park before. Come and give it a go. It's the last local one until Autumn.  It'd be great to see some more blue vests out there.  Oh and if you arrive early enough I can guarantee you a giggle or two watching the girls go for a tent PB.

Miche
Posted by Gary Stevens at 09:50 No comments:

Posted by Gary Stevens at 13:38 No comments:

I mentioned this at the AGM last night

The Club code to use to register as drink station marshal is: AGMMAST
Posted by Gary Stevens at 11:02 No comments:

It's that time of year again

😊
Fees for 2018 were set at last nights AGM and fortunately for us all there's no increase this year.
£35 renewal
£40 new membership
£20 second claim
As per the club constitution all renewals need to be in by Feb 18th then it will revert to the new members fee of £40.
Payment can be made via the PayPal link on the website & blog which should be live at some point today.
If you want to pay cash I'll be around at Monday & Wednesdays training sessions.
Finally if anyone has changed address since last year could you message me so I can alter the records.
Also if your thinking of not renewing please get in touch to see if there's anything we can do to change your mind

Posted by Gary Stevens at 09:11 No comments:

The next race in the club champs is this Saturday (20th) at LSV (sat nav WN7 4JY)
This is a SELCC race so if you raced at Tandle Hill wear the same number otherwise you need to register on the day and pay £6, which will cover you for the remaining SELCC races (there is another one at Chorley on 17th Feb)
Start times - ladies 1:40 pm & men 2:20 pm
Website www.selcc.co.uk
If you need clarification on anything before Saturday, I can be contacted on (e) mark.riches@talk21.com or (m) 07508 213207
Posted by Gary Stevens at 08:41 No comments: 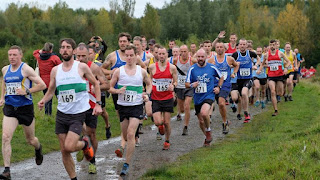 A date for your diary. 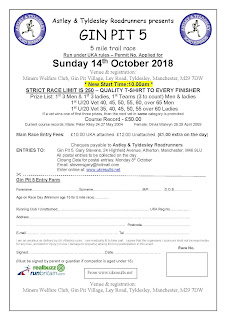 Posted by Gary Stevens at 11:46 No comments:

The fell fixtures for this year are as below.  I’ve mostly followed the Run the Moors fixutres and there’s a good mix in here, with plenty of local choice, but a couple in the Peak District and in the Lakes for variety.

As always, please give me a shout if you need any advice, although I’ll publish details in advance of each race during the course of the year.  And don’t forget to “like” the Run the Moors Facebook page, which hopefully will be more active this year than last.

Best 5 from 12, 3 to qualify for prizes. 1 bonus pt for “M” races, 2 bonus points for “L” races.
An additional RTM race was selected on 21st July Ingleborough (BM), but I have excluded this from the A&T champs due to a clash with Thunder Run, however I will be generous and award 1 bonus point if you do compete in this one.
Posted by Gary Stevens at 08:46 No comments:

Please come along and support the running of your Club

Posted by Gary Stevens at 13:14 No comments:

The next race in this year’s x-country champs is this Saturday (13th) at Towneley Park, Burnley Sat Nav: BB11 3RQ

This is a Mid Lancs race so if you have already raced at Mid Lancs this season, excluding Liverpool, please wear the same number otherwise Tim will provide you with a number

If you need any clarification before Saturday my contact details are below:

My earlier post HERE refers
I would like to share the role of Cross-country Captain on a formal basis. The role has been shared informally for the last 2 – 3 seasons anyway!
I am happy to arrange registration etc. prior to the start of the season but I am finding it increasingly difficult to attend the races. We just need someone to be the contact on the day, collect and distribute numbers, collect money etc.
If you are interested please let me know by Friday 12th January; the role comes with the option to join the Committee but you can carry out the role without joining the Committee if you prefer

Posted by Gary Stevens at 13:17 No comments: