It's been 3 years since my last trip to Goring-on-Thames for the A100 and on my last visit I managed to achieve my target of a sub-24hr 100 miles after a DNF at 87 miles in 2015.
The last three years have been a work in progress. I knew that I wasn't finished with the distance, or this race, but I needed a bit of time to consolidate, enjoy my running and plan my attack for the next (official) venture into triple figures.
I made big plans for a big year in 2018, which started with a bang in January with the self-organised 'Peaky Blinder' run of 105 miles from Birmingham to Gin Pit with Phil, Stu and Bren. As most people know, I didn't go on to complete this as my knee went at 95 due to the poor underfoot conditions and I had to leave Phil and Stu to finish it for the team. Little did I know how much the experience of trudging through thick mud and counting (singing) down the miles through the night to Nantwich would come in handy down the line. I used the rest of the year to support Phil on his EPIC 12 Ultras challenge and gained some vital experience on the way, that would all come together on this Autumn day in 2019.

With all this experience under my belt I felt it was time to have another serious bash at 100 miles and where better to do it than at the Centurion Autumn 100. For anybody looking to run 100 miles (which I assume is very few) this event is the perfect race, a central point that you return to every 25 miles, 4 different out and back loops on beautiful trails, amazing volunteers who know exactly what you are going through as they are either runners themselves or have a great deal of experience, and the option to utilise pacers for the last 50 miles all made it the obvious choice.
I have felt for a while now that with the right preparation and conditions on the day that I was capable of completing the distance within 20hrs, in all honesty I thought it would take me 2-3 attempts over a year or so to get these perfect conditions, but at the beginning of this year I devised a plan with Claire to do less racing and concentrate on getting faster and more efficient at running further.
It felt like such a long time of grinding out hour after hour running up and down the canals and trails of Leigh, Wigan and Manchester through the heat and rain of Spring and Summer, but I finally made it to the start line. 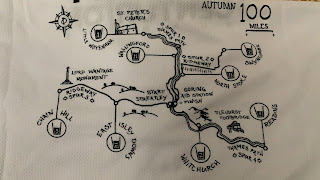 The start of the race was fun. I decided, against my plan, to just go out with a group and run to feel. As it would be for the rest of the day, the ground for the first 25 mile leg was mostly wet with slippery mud and uneven trail in parts interspersed with decent sections of very runnable hard packed trail and road.
The plan for leg 1 was to run steadily to the first checkpoint and then settle in to a jog/walk strategy for the rest of the first half of the race before my pacers took over control. I should have run this leg in 4hrs, but got a bit carried away.... Coming in around 3:33. After a quick change of shoes to something more 'grippy' and an ear bending from Claire I went out again for leg 2.

I was now out on my own and working to THE PLAN, so it was great to see some friendly faces before I set off for 4 1/2 hours of lonely muddy trails, in the form of my Pacers Mike and Rach, Road Chief and Overlord Claire; and Helen (Claire's Sister) making the trip from London with Henry to cheer on his uncle David and dish out the High-5's. Just what I needed.

Leg 2 takes in a beautiful part of the ridgeway, so I tried to take in as much of this amazing part of our countryside as possible and enjoy the day. Around mile 35 I got my first and only bout of doubt, the enormity of the task at hand was settling in and with 65 miles still to go and the weather and trail conditions only getting tougher I got a bit worried as to whether it was going to be my day this time.
Those who know me, or see my Facebook account, will know that my family lost my Grandad in August who was a pilar of strength for the whole family and a role model and hero to me. It was also my Nana and G'dad who originally got me and my brother into running in my teens when they took us to Salford Mets where we spent 3 great years travelling the Northwest for Track Meets and Cross Country. It was at this point in the race that I had to go to my mantra. Before the race I wrote my Grandad's name 'Sam' on the back of my watch hand so that every time I checked the time or distance I would be able to see that he was with me. As I was at this low point I had a little word to myself, reminded myself of how proud he was and would be of me as well as everyone else that had given me their time and support on this journey. After I got to the turnaround point at 37 miles I was reinvigorated to get through the challenge for everyone who believed in me and for myself.
Throughout the race, as the rain got heavier through the the night, the marker pen slowly washed from the back of my hand so that it was gone by the time I finished. I'm not superstitious in any way, but I took this as my Grandad telling me that I didn't need him anymore, that I had this in me and was strong enough to go on and finish this on my own.

By the end of Leg 2 the Overlord was happy that I was now back on plan and Rach was raring to go as pacer for Leg 3 after worries that a recurring knee injury might put her on the bench. A quick bit of veggie soup and out on the ridgeway in the opposite direction.
Rach did an amazing job, she kept me to target pace, made sure that I was eating and drinking regularly and kept me entertained for the 5hrs she had to endure of me trying to talk her into running 100 miles in the future. I'm sure Leg 3 would be a beautiful area to go for a nice run or walk on a summer day, but to run it through the night was pretty uneventful although we did manage to get up onto the ridgeway just before sunset to take in the countryside views. On the way back to Goring there was a steady stream of people on their way out to Chain Hill whom we would pass on our well wishes to, which was a reminder of how far others still have left to run and how tough the race was for me on my previous two visits.
With Rach's shift over, 13:17 on the clock and 26 miles left to run, Mike and I set off on leg 4.
We soon found out that the final leg was to be broken down into 3 segments, the first 8 miles were a mixture of muddy, grassy trails interspersed with short sharp hills, the middle 10 miles a flat Tarmac Canal path to make up some time and the last 8 miles a reversal of the first.
Mike set a rythm from the off and kept me going with military precision. There was no time or space for me to worry about any 'what-if's', we were on a schedule and we both had a job to do. I had a time to achieve and Mike had the fear of Claire if he didn't get me there! We had a great time. There were so many tired and sore looking people out on the course at that time of night and I was so glad that wasn't the case for me. We even managed to take a couple of lost places back and pass a couple of other runners out there, which fed the motivation At this late phase.
As we came off the trail and back onto the muddy banks of the Thames I could finally dream of the finish with only 1 1/2 miles to go. It is strange that this was the part of the race where I struggled most to actually run as I became overwhelmed  with what I was about to complete. Mike kept me moving steadily, avoiding the worst of the mud and saving my legs for the final run into Goring Village Hall.
It was just after 4am in the sleeping town of Goring-on-Thames when Dave Sloan and Mike Sinclair decided that best thing to do was have a sprint finish! Mike thought he'd won, but I changed the goalposts at the last moment to take the tape with an enormous cheer and much reprimand as a reminder of the sleeping locals from the marshals at the finish (sorry),  before trotting round the corner to the official  race finish line to complete 100 mile on foot in 19hrs 13mins and 6secs. 47 minutes quicker than I even dreamed of doing and a full 4 1/2 hours off my PB. Oh, and 11th overall finisher in a race where 35% of people DNF'd.

I had a moment to myself (and maybe a little tear) once the elation of the finish had settled, to appreciate everything I had gone through to get here and the sacrifices of those who have supported me throughout the whole journey over the past three years.
Now?
I'd like to think it's feet up time, but those who know me will know better :)
Dave.
Posted by Dave Sloan at 17:53